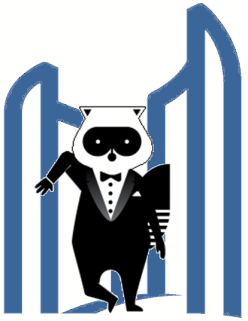 The city wrapped up a series of public consultations last Friday regarding a proposal to relax the rules governing the downtown Billy Bishop Toronto City Airport (BBTCA). They’re looking into the matter as a result of Porter Airlines’ request to allow a new breed of so-called “whisper” jets to use the airport. Jet aircraft are presently banned under the agreement that guides the operation of the airport.

I’ve been fascinated by charting the progress of the airport over time into what it is now – a bustling and highly appreciated though controversial waterfront development. It has grown exponentially since 2006 when it served a few thousand passengers per year to what will likely be close to 3 million this year, with no limit in sight. 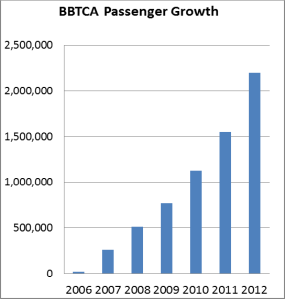 The airport’s success is entirely a result of the rapid growth of Porter airlines, launched by airline wonk Robert Deluce.

On the surface it appears as if Deluce is the mastermind behind the skyrocketing success of Porter. However, the whole project of airline operations out of the BBTCA seems to have received the support of more than a few government and industry bigwigs, judging by the history of events leading up to it.

At the outset, the Toronto City Centre Airport (as it was known at the time) was set up as just a local airport that was allowed to host “limited commercial” flights, presumably in consideration of the odd charter flight that might wish to operate from the island. These were the terms of the restrictive Tripartite Agreement (27MB PDF) struck in 1983 between the city, the federal government, and the Toronto Port Authority (TPA) who manage the lands. Then one at a time, important restrictions on the airport were gradually slackened until its character and purpose no longer resembled anything that might have been intended by the original agreement.

For example, in 1985 an exception was added specifically to allow Bombardier’s then-new Dash-8, as it wasn’t able to take off and land as steeply as required in the agreement (thereby leaving a greater noise footprint at ground level). The fact that the plane is built at Bombardier’s Downsview facility in Toronto was obviously a very influential factor contributing to this first erosion of the agreement.

Then in the late nineties it became clear that the airport could no longer maintain the status quo, as government funding was being withdrawn and the TPA was expected to start walking on its own two feet. It either had to expand or be shut down and turned into a park. Expansion was the option of choice amongst the movers and shakers at the time, including Mayor Mel Lastman and Prime Minister Jean Chretien. That’s also around the time that Deluce strode in on the party and offered to run an airline out of the island.

Their expansion plan called for a road bridge link to the island and an enlarged terminal, both banned in the 1983 agreement. However the process of again watering down the restrictions to the airport was stalled for years due to legal feuds between the TPA, Toronto Housing Corporation, the federal government, and the city. It was only the impending threat of election of a new anti-bridge mayor, David Miller, that saw them rally together all of a sudden in 2003 to settle their differences and move forward with modifications to the deal, before it was too late.

But it was too late. As soon as Miller took office, he stopped the bridge as he had promised to do in his electoral campaign. He felt that the TPA had not obtained all necessary approvals before beginning work on the project. This led to a lawsuit by the TPA against both the city and the federal government. In the end the feds settled with the TPA despite the city’s objections. Out of the $35 million dollar settlement the construction company received $5.7 million for their sunk costs on the bridge construction, but most interestingly Robert Deluce pocketed $20 million of his own from that sum, for some unexplained reason.

Another boost to Deluce came from the Director of Aeronautics at Transport Canada in September 2006, who certified the Bombardier Q400 to fly out of Billy Bishop airport. This approval was based on that earlier amendment to the tripartite agreement that exempted “the de Havilland Dash-8”, since the Q400 airframe is based on that Dash-8. This, despite the fact that the Q400 wouldn’t exist for another 15 years after that exemption, while at the same time the new aircraft is nearly double the weight and capacity of the old one (65 200 lbs. up from 34 500, and 78 seats vs. 40).

2006 was actually a year of dizzying activity towards the founding of an airline at Billy Bishop. Some influential power players from the federal government, Bombardier, and OMERS pension fund all barged forward within days of Harper’s electoral victory to establish a viable airport on the island. This included a $120 million commitment to purchase Q400 planes in February, 7 months before they were even cleared for use at Billy Bishop by Transport Canada! By the looks of it, the bridge cancellation in 2003 had triggered a secret and immersive new campaign to impose a commercial airport on the island that skirted around public input.

Now a pedestrian tunnel is being built to connect the island to the mainland, again contrary to the tripartite agreement. I honestly have no idea how that one got shoved through. [March 2014 edit: In fact, the tripartite agreement only bans a “bridge or vehicular tunnel”. The pedestrian tunnel only needed council approval, which was granted in 2011.]

And that brings us to today.

The tripartite agreement still does not allow the airport to operate jets or extend the runway, but Deluce wants to allow jets and extend the runway. Will it happen? Looking at the history of events, it’s clear that it will. The powers-that-be had clearly decided many, many years ago that this was the airport’s fate regardless of the will of the electorate. Should it happen? That’s an entirely different question with plenty of fascinating details of its own which will probably merit another post.

The take-away from this information however is that Porter airlines is not merely the brainchild of Robert Deluce but of many much more powerful and heavily vested interests who are working behind the scenes to move the BBTCA agenda forward. Deluce may very well be nothing more than the designated frontman, deflecting attention from unions, corporations, pension funds and governments who need to maintain a sleek public profile. Perhaps in return for being the fall guy, taking all the public scrutiny and recrimination, Deluce gets rewarded with his own airline to play with?